Over 120 people attended and participated in the CorkBIC Going International Conference in Fota Island Hotel on Wednesday 16th October.


Keynote speakers included Candace Johnson, serial entrepreneur and investor; Kevin O’Leary, CEO, Qumas and Julian Costley, Heaton Camillo and co-founder E*TRADE who addressed key areas like getting investment, the mindset of the entrepreneur, preparing for exits and looking at the new rules of entrepreneurship.


One of key messages  for entrepreneurs is that the nearest exit may be behind you and entrepreneurs were being encouraged to execute quickly rather than over planning, a disruptive approach is the key – just get on a plane and go global – don’t over plan. Identify and act on your defining moments and key to raising smart investment is that investors don’t invest in a company they invest in a person who has a vision, passion, energy. Having a joined up economy encompassing all elements including, entrepreneurs, VC’s, Angel Investors, Banks, Agencies etc. is key to delivering the new economy. Photo: Kevin O'Leary, in action 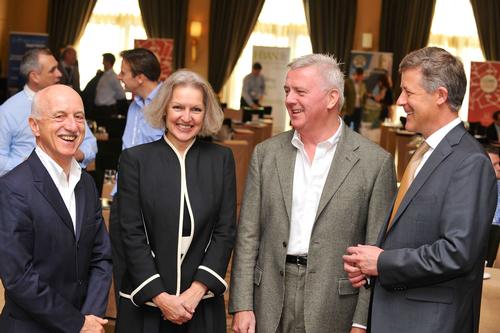 
We also heard from Brendan O’Driscoll, founder of Soundwave who gave an energetic presentation on the rise of Soundwave since launch in June 2013. Soundwave allows users to see what music their friends or anyone in a given area of the world is listening to on their smart phone. Key to their success are their 5 entrepreneurship rules which are act fast, meet the people, use every resource available, no paid marketing and if you fail do it early and quickly!

Padraig Lynch, Alanya being presented with Most Investible Proposition by John O'Doherty, AIB; also in the photo is Pete Smyth, Broadlake Capital who chaired the Venture Academy® supported by AIB

For more information on the event go to Going International 2013

Read the Coverage in the Irish Examiner on Thursday 17th October, 2013
Click HERE